What is Banana Freckle Disease?

admin
BANANA FRECKLE DISEASE
Darwin has a big banana problem. Farmers in the Northern Territory have actually found a disease in the fruit. That could be bad news for the entire banana industry. This banana has what's called Phyllosticta Cavendishii, or Banana Freckle. It's actually a fungus found in the soil that can get into the roots and fruits of the nana. They're still safe to eat, but the disease stops the plant from producing good, supermarket quality fruit. The big problem is that there's actually no treatment. It's why, when there was an outbreak back in 2013, more than $26 million dollars worth of bananas had to be dug up and destroyed, and the Northern Territories banana industry was essentially wiped out. Now, the disease is back. Just this week Banana Freckle has been found at a farm south of Darwin, and authorities are trying to work out if the disease has spread. It's pretty devastating news for Australia's 500 million dollar banana industry and many are hoping this disease stays under control

SKI RESORTS OPEN
Good news for snow lovers! Some ski fields in the country's southeast are set to open ahead of schedule. Yep, it might only be the second day of winter, but thanks to an icy Antarctic cold snap, more than 30 centimetres of snow has covered Falls Creek and Hotham in Victoria and Perisher in NSW. It means the ski resorts will all begin their snow seasons one week earlier, opening this Saturday.

QUEEN'S PLATINUM JUBILEE
The Queen's Platinum Jubilee celebrations are set to kick off! It's got a lot of people in the UK and around the world pretty excited. With some Royal fans even camping outside Buckingham Palace to make sure they get the best view of all the fun. How do you celebrate a person who has been Queen for 70 years? A cake? A giant pink corgi? Maybe organise 1400 public events all over the UK, and more than 1700 street parties? Yep the Queen's Platinum Jubilee celebrations are finally here! To catch you up, the Platinum Jubilee marks Queen Elizabeth's 70th year on the throne. She's actually the first British monarch to reach that milestone. So it's fair to say people are pretty excited! All up, the UK will be spending more than 1.4 billion dollars celebrating the Queen's milestone this weekend. There will be a military parade, a church service, street parties and a concert outside Buckingham Palace. And to ensure the best seats in the house, or rather street, some people have ditched the comfort of their homes to camp! Oh and to make sure there is plenty of time to celebrate, Her Majesty is gifting the UK with a four day weekend! Wait, can she gift us with a 4 day weekend? She's our monarch too!

LARGEST PLANT
If you've ever wondered what the largest plant in the world is, well this is it - Poseidon's ribbon weed! The sea grass, which covers a whopping 180 kilometres of ocean floor just off the coast of Western Australia is thought to be at least 4 and a half thousand years old. At first Scientists thought the "meadow" was a bunch of different species. But it turns out, they're all part of the one plant!

MOUNT ETNA ERUPTS
From water, to fire! This is Mount Etna in Italy, Europe's highest and most active volcano! A camera crew decided to get really close to the natural wonder to take a few snaps and the video you're seeing now. Etna erupts pretty regularly, and usually doesn't cause much damage.

ROBOT GOAT
And finally. This one's got us wondering if it is natural. A goat-shaped robot has been unveiled in Japan. Why, you ask? Well it can carry loads of up to 100 kilograms across all kinds of surfaces. The Robo-Goats creators say there's been a bit of a labour shortage in Japan, especially in the countryside, so they hope their robotic goat can help!

What is Banana Freckle Disease? 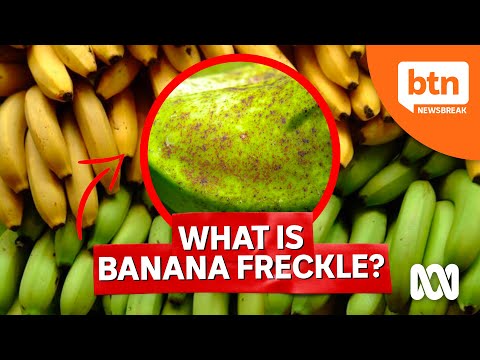 BANANA FRECKLE DISEASE Darwin has a big banana problem. Farmers in the Northern Territory have actually found a disease in the fruit. That could be ba...