Tuberculosis (TB): Progression of the Disease, Latent and Active Infections.

admin
This video is available for instant download licensing here: https://www.alilamedicalmedia.com/-/galleries/all-animations/respiratory-system-videos/-/medias/63e4494c-bc90-4b5f-a058-dccd2756252e-progression-of-tuberculosis-narrated-animation
Voice by: Qudsi Baker.
©Alila Medical Media. All rights reserved.
Support us on Patreon and get FREE downloads and other great rewards: patreon.com/AlilaMedicalMedia
All images/videos by Alila Medical Media are for information purposes ONLY and are NOT intended to replace professional medical advice, diagnosis or treatment. Always seek the advice of a qualified healthcare provider with any questions you may have regarding a medical condition.
Tuberculosis, or TB, is one of the oldest and most common infectious diseases. About one third of the world population is believed to be infected with TB. Fortunately, only about 5% of these infections progress to active disease. The other 95% of infected people are said to have a dormant or latent infection; they do not develop any symptoms, and do not transmit the disease.
Tuberculosis is caused by a rod-shaped bacterium, or a bacillus, called Mycobacterium tuberculosis. An infection is initiated following inhalation of mycobacteria present in aerosol droplets discharged into the atmosphere by a person with an active infection. The transmission process is very efficient as these droplets can persist in the atmosphere for several hours and the infectious dose is very low – less than 10 bacilli are needed to start the infection.
Once in the lung, the bacteria meet with the body’s first-line defense - the alveolar macrophages. The bacteria are ingested by the macrophages but manage to survive inside. Internalization of the bacilli triggers an inflammatory response that brings other defensive cells to the area. Together, these cells form a mass of tissue, called a granuloma, characteristic of the disease.
In its early stage, the granuloma has a core of infected macrophages enclosed by other cells of the immune system. As cellular immunity develops, macrophages loaded with bacteria are killed, resulting in the formation of the caseous center of the granuloma. The bacteria become dormant but may remain alive for decades. This enclosed infection is referred to as latent tuberculosis and may persist throughout a person's life without causing any symptoms.
The strength of the body’s immune response determines whether an infection is arrested here or progresses to the next stage. In healthy people, the infection may be stopped permanently at this point. The granulomas subsequently heal, leaving small calcified lesions. On the other hand, if the immune system is compromised by immunosuppressive drugs, HIV infections, malnutrition, aging, or other factors, the bacteria can be re-activated, replicate, escape from the granuloma and spread to other parts of the lungs causing active pulmonary tuberculosis. This reactivation may occur months or even years after the initial infection.
In some cases, the bacteria may also spread to other organs of the body via the lymphatic system or the bloodstream. This widespread form of TB disease, called disseminated TB or miliary TB, occurs most commonly in the very young, the very old and those with HIV infections.
Tuberculosis is generally treatable with antibiotics. Several antibiotics are usually prescribed for many months due to the slow growth rate of the bacteria. It’s very important that the patients complete the course of the treatment to prevent development of drug-resistant bacteria and re-occurrence of the disease.

Tuberculosis (TB): Progression of the Disease, Latent and Active Infections. 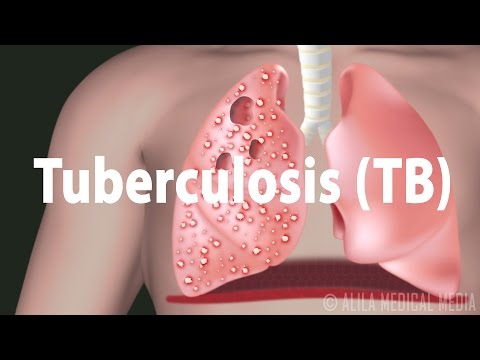 This video is available for instant download licensing here: https://www.alilamedicalmedia.com/-/galleries/all-animations/respiratory-system-videos/-/...