admin
On friday, the Indian Film industry lost another of its young and bright stars to an unexpected cardiac arrest. Puneeth Raj Kumar was only 46 years old, was a healthy fitness enthusiast and had just finished at the gym and then started complaining of intense fatigue. Unfortunately his heart then went into a very fast but ineffective rhythm called ventricular fibrillation. As no blood was being circulated by the heart, all the organs started suffocating including his brain and by the time he reached hospital it was too late and he was pronounced dead. He leaves behind a young wife and two daughters. Very much in keeping with kind of human being he was, he had asked for his eyes to be donated in the event of his death and his brave family made sure that his wishes were respected. This is a devastating story and all we can do is wish for stength for his family to bear such a huge loss.
I wanted to do a video on sudden cardiac arrest and sudden death. I can understand that some may not want to watch this due to its content, it does have some messages that may be helpful. I dedicate this video to Puneeth and those that have been left bereft.
Sudden cardiac arrest refers to the sudden cessation of cardiac activity leading to no blood being circulated around the body. This is usually due to the heart going into an abnormal heart rhythm which results in the heart not beating at all or the heart beating so fast that it is completely ineffective. The latter is the most common heart rhythm disturbance and referred to as ventricular fibrillation. If cardiac activity is not restored in some way then inevitably this leads to death which is then termed sudden cardiac death.
Sudden cardiac death is not uncommon. It is estimated that 15% of total mortality in the western world can be attributed to sudden cardiac death. The risk of experiencing sudden cardiac arrest can be increased by a number of factors but the most important 2 are:
Increasing age
Underlying cardiac disease (which may be congenital or acquired).
In general sudden cardiac arrest is seen 2-3x more commonly in men compared to women. If there is a history of clinically recognised heart disease (congenital heart disease, angina, previous heart attacks, cardiomyopathy and heart failure) then there is 6-10 fold increased risk of SCD. In addition if patients dont have known heart disease but have major risk factors for heart disease then the risk is increased by 2-4x. SCA is the mechanism of death in 60% of patients with known coronary heart disease and it is the initial clinical manifestation in approximately 15% of patients.
What are the causes of sudden cardiac arrest: 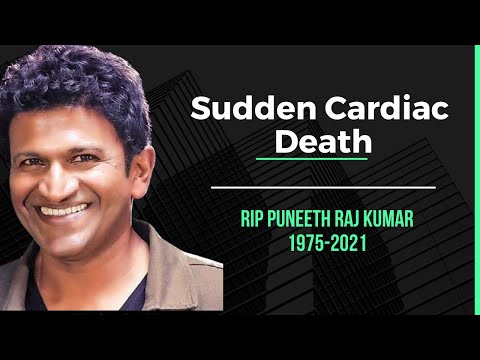 On friday, the Indian Film industry lost another of its young and bright stars to an unexpected cardiac arrest. Puneeth Raj Kumar was only 46 years ol...