admin
Rick and Morty season six, episode two gives us a full “Die Hard” parody in under thirty minutes, as well as a complex story about freedom, love, respect, and reality. Dan Harmon and Justin Roiland are huge fans of “Die Hard,” and it’s not the first reference to it that we’ve gotten. “Mort: A Life Well Lived” takes place in Blips and Chitz – more specifically, inside the game Roy: A Life Well Lived that we first see in season two. Morty’s subconscious is split up into a billion different non-playable characters in the game, so Rick jumps in as the role of Roy, to get every piece of his grandson out. They spend over fifty years inside the game, battling it out while Summer is doing a “Die Hard” in the real world against alien terrorists. This episode is packed with direct “Die Hard” references and scenes. There’s a direct reference to the tower that Hans Gruber falls from, Summer tapes a gun to her back, there’s a classic Tower Man joke that Rick jokes about being “on the nose.” The creators know that Die Hard isn’t broken, so they don’t try to fix it – they just have fun with it. What’s most significant about this episode is Rick leaving Marta in the video game. She was the aspect of Morty that was distrusting and skeptical of Rick’s behavior. What kind of Morty are we going to have for the remainder of the season? We want to see your theories in the comments!


For copyright matters please contact us at: [email protected] 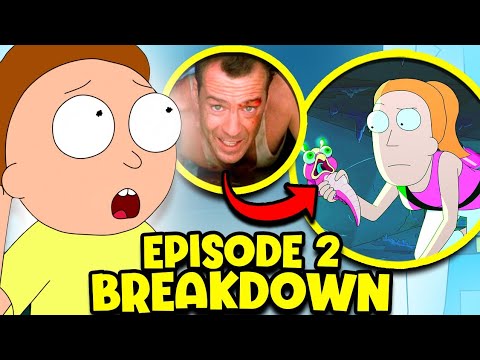 Rick and Morty season six, episode two gives us a full “Die Hard” parody in under thirty minutes, as well as a complex story about freedom, love, resp...