● Pompe disease is a rare genetic disorder that disrupts the body’s ability to digest complex sugars.
● The lack of digestion results in glycogen buildup inside the muscles, affecting the muscles and other tissues of the body.
● The condition occurs due to a deficiency of the acid alfa glucosidase (GAA) enzyme, which is used in the digestion of complex sugars.
● The enzyme is affected due to mutations in the GAA gene, which are irreversible like most other genetic disorders.
● However, this inherited mutation is quite rare, with just 1 in 40,000 people in the US suffering from this condition.
● Let’s look at Pompe disease in detail and see how you can deal with it:
Types
● There are three types of Pompe disease:
1. Classic infantile-onset Pompe disease that occurs just a few months after birth.
2. Non-classic infantile-onset Pompe disease that takes a bit longer, usually showing symptoms at the one-year-old mark, and
3. Late-onset Pompe disease, which occurs later in life. This type may show up deep into the teen years or at the start of adulthood.
Symptoms
● Symptoms of Pompe disease vary according to the type you’re dealing with.
● The symptoms caused by the classic type are:
1. Enlarged muscles
2. Weak liver
3. Feeding problems
4. Breathing difficulties
5. Poor muscle tone
6. Interrupted growth
7. Inability to gain weight or muscle
8. Respiratory infections
● Non-classic Pompe disease symptoms include:
1. Breathing problems
2. Deterioration in muscle strength
3. Delayed motor skills
4. Abnormal heart growth
● Late-onset type Pompe disease causes many of the same symptoms as the other two types, but can also result in:
1. Weakened legs and trunk
2. Frequent lung infections
3. Problems with balance
4. Muscle pain in a large part of the body
5. Irregular heartbeat
6. Difficulty in walking
7. Fatigue
8. Hearing difficulties
Do you know anyone with Pompe disease? How did they deal with the problem? Let us know in the comments below, and don’t forget to give this video a like and subscribe to the channel.
Diagnosis
● After recognizing the symptoms, a doctor will conduct blood tests to check on enzyme levels.
● A low GAA level will indicate Pompe disease, and your doctor will aim to confirm that diagnosis by:
1. Checking your family history
2. Conducting breathing and sleep tests
3. Checking on the heart with an ECG
4. Checking muscle function through an electromyography
Treatment
● Enzyme replacement therapy (ERT) is the only approved method of treating Pompe disease.
● A genetically engineered enzyme called alglucosidase alfa is injected into a patient’s body intravenously to make up for the lack of GAA.
● Furthermore, you might also need some extra medical care if the symptoms become intense. 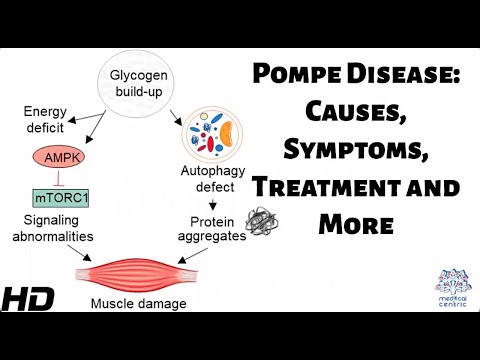