admin
Lyme Disease is a bacterial infection that occurs when you are bitten by an infected tick. Early symptoms include fever, headache, rash, and fatigue. However, if the condition is not treated quickly, the infection can spread to your heart, joints, and nervous system.

The disease is not pleasant to deal with, but if you’re familiar with its effects, you will be able to get prompt treatment and overcome it quickly. This video will discuss lyme disease symptoms, testing and treatment, so be sure to watch until the end.

Lyme disease is spread through back-legged ticks, also known as deer ticks, which are mostly found in the Northeast, Mid-Atlantic, Upper Midwest and Pacific Coast regions of the United States. Ticks that are infected with the Borrelia burgdorferi bacteria may bite a human on any part of the body, but they will typically target hidden areas such as the groin, armpits or scalp. The tick must be attached to the human for 36 to 48 hours to successfully infect them.

People who spend a lot of time outdoors in wooded, grassy areas are especially prone to Lyme Disease. Bites are also more likely to occur during the summer, as this is when ticks are most active. However, ticks will also be active during warm fall or winter seasons.

Lyme Disease is most prevalent in the northeast and upper Midwest part of the country due to the large population of white-footed mice and deer in the region. These are the tick’s preferred hosts. It can also infect other species of ticks who can transmit the disease to humans and animals.

Early cases of Lyme Disease were first recorded in Europe in 1883. Since then, various manifestations were indicated such as acrodermatitis, erythema migrans, lymphocytic meningradiculitis, and so on. However, these conditions were not recognized as being symptoms of a single infectious disease until an outbreak of what was first diagnosed as juvenile arthritis followed by a rash was diagnosed among residents of Lyme, Connecticut.

It’s difficult to determine how many cases of Lyme Disease occur each year. This is due to different criteria used to determine each case and various surveillance methods used to investigate them.

While about 30,000 cases of Lyme Disease are reported to the CDC by state health departments and the District of Columbia, it is suspected that nearly 500,000 people in the United States get Lyme disease each year.

What are the Symptoms of Lyme Disease?

Lyme Disease symptoms occur in 3 stages getting progressively worse as they go.

Other symptoms that appear during stage 1 include fever, headache, fatigue, joint stiffness, muscle aches and pains, and swollen lymph nodes.

If Lyme Disease is untreated, it will advance to stage 2. Symptoms of stage 2 will typically set in 3 to 10 weeks after the tick bite occurs. This stage is also referred to as early disseminated disease.

Symptoms of Stage 2 Lyme Disease include:

• Rashes that appear on other parts of the body
• Neck pain and stiffness
• Muscle weakness on one or both sides of the face
• Irregular heartbeat due to abnormal immune system in the heart tissue
• Pain that starts in the back and hips and spreads to the legs
• Pain, numbness, and weakness in the hands and feet
• Painful inflammation in the eye area
• Eye pain and vision loss due to unusual immune system activity in the eye nerves

The third stage of Lyme Disease is also known as late stage disseminated disease. It sets in 2 to 12 months after the tick bite.

The most common stage 3 Lyme Disease symptom in the United States is arthritis in the knees and other large joints. The pain and stiffness may last a long time while other symptoms come and go.

In Europe, people with the disease may experience a skin condition called acrodermatitis chronic atrophicans. It causes the skin on the backs of the hands and the tops of the feet to become discolored. It can also spread to the elbows and knees. In some cases, it can cause damage to tissues and joints.

The skin condition may occur 2 to 12 months after the tick bite, or it can take many years to set in.

If you notice a tick bite that has not yet become engorged, it’s possible that the tick may not have remained attached to you long enough for the bacteria to take effect. However, it’s important to keep an eye on it. Look out for a rash forming around the tick bite, flu-like symptoms and joint pain which may be signs of lyme disease.

If you suspect you have Lyme Disease, it’s advisable to see a doctor. They will run a series of tests to determine if you are infected. 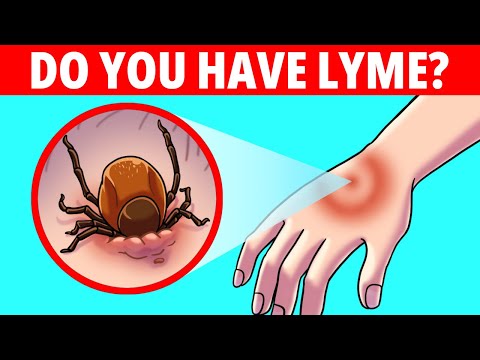 Lyme Disease is a bacterial infection that occurs when you are bitten by an infected tick. Early symptoms include fever, headache, rash, and fatigue. ...