admin
Lumpy Skin Disease (LSD) is a contagious viral disease that affects cattle and causes fever, skin nodules, and death. Mosquitoes, flies, lice, and wasps spread the disease through direct contact with cattle as well as contaminated food and water. The disease entered India, Bangladesh and China in July 2019. LSD has claimed the lives of about 67,000 cattle in seven Indian states and one union territory. Because of LSD, cows are not able to produce a lot of milk. This is why milk production has reduced in a lot of states.

Meanwhile, Rajasthan has emerged as one of the worst-hit states; the milk collection there has been reportedly reduced by three-four lakh liters a day. The average number of deaths in Rajasthan is currently 600-700 per day. In other states, however, the deaths are less than 100. The Central Government has begun administering the 'goat pox vaccine' to all cattle in the affected states. The government said that the vaccine is "100 percent effective" against the lumpy skin disease. Already 1.5 crore doses have been administered in the eight affected states. PM Narendra Modi on Monday announced that an indigenous vaccine has been developed to fight the LSD-causing virus. Two companies are manufacturing this vaccine and they have the capacity to produce 4 crore doses a month.

Follow us for all the latest News & Entertainment and to keep up-to date on all the happenings at ISH News:

Thanks for watching!! Favourites, Likes, Feedbacks & Shares are always appreciated. 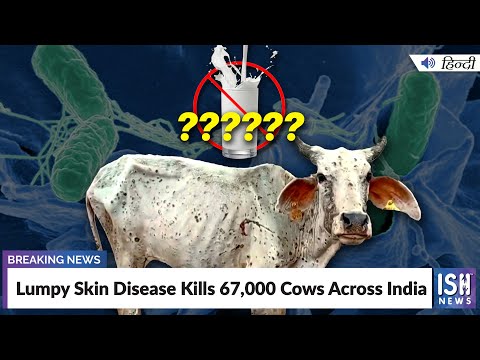