Decisions and effects:
After the Fall - 1) I tried tripping on the bomb wire once and saw that their was not much change. No one really got hurt so that miss might still be okay.
2) Eric wanted to lead but I feel Nick and Jason have a better coordination. Hence I left him behind.

Slayer - 1) You are fine missing one or 2 QTE's while running away from the monster initially as long as you get to the part where his leg gets caught and the monster gets burnt in the sun. The second part, however, is more important where you need to aim and kill it since it gives Salim an idea of how to kill it in the future.
2) I and going the sentimental way and choosing friendly/romantic dialogues between the two since I want a happy ending. Premonition Fallen shows you something important to take a decision later on.
3) Go to the left darker chamber first after the journal part 3. It gives you a medical aid kit. Not sure of the relevance at the moment but probably really helpful.
4) Even if you don't shoot Dar on the shoulder or miss, Nick can survive through the QTE sequence and the scene will play on. I think it doesn't affect the story but will keep this updated.

The Truce - 1) Definitely agree with Salim's plan for attacking the demon. If you fail the QTE sequence, the heart beat mini game begins and as long as you don't fail that, you can still kill the creature. Otherwise it runs away and Eric never gets his hand on one.
2) I messed up one of the sequences earlier between Jason and Salim when I killed the shephard (Shot him on the leg and it's still considered as I killed him -.-). It affect the outcomes so the best one was to let Salim go in my case since he always shot Jason in all of my scenarios. However, I think if you did not kill the shephard as Jason, you should try and make Salim put away his gun. He always shoots at Jason in my consequence. Hence, Surrendered premonition doesn't happen in my story.
3) Just keep in mind where you plant the C4. It seems one of the premonitions I saw - Rachel blew up. You might have to choose where to run later. I planted it at the side.

Blood bath - 1) QTE's for Rachel seem to be important. If you miss, Clara comes to save you and then you owe her. Otherwise you just meet her a bit later and then you continue together. I chose to help her later on. Hopefully, that works out.
2) The weapon you keep from the Staked corpse earlier helps you push the monster Joe away.

Join this channel to get access to perks:
https://www.youtube.com/channel/UC_98MHjL9QsGB9YAgC0To8g/join 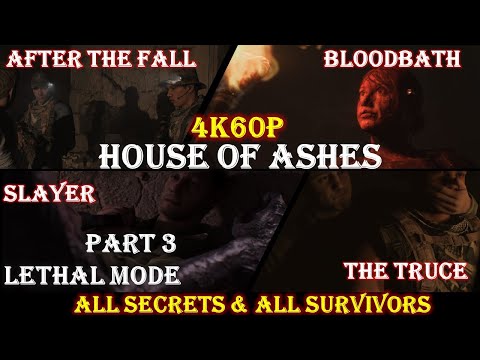 Full Playlist (Lethal Difficulty) for the gameplay: https://www.youtube.com/playlist?list=PLo949gflmv61hBj0HHdLAvYTTgTG7R3aU This video shows you part...