Graves' Disease: Everything You Need To Know

admin
Graves' disease (German: Morbus Basedow), also known as toxic diffuse goiter, is an autoimmune disease that affects the thyroid.[1] It frequently results in and is the most common cause of hyperthyroidism.[5] It also often results in an enlarged thyroid.[1] Signs and symptoms of hyperthyroidism may include irritability, muscle weakness, sleeping problems, a fast heartbeat, poor tolerance of heat, diarrhea and unintentional weight loss.[1] Other symptoms may include thickening of the skin on the shins, known as pretibial myxedema, and eye bulging, a condition caused by Graves' ophthalmopathy.[1] About 25 to 30% of people with the condition develop eye problems.[1][4]

The exact cause of the disease is unclear; however, it is believed to involve a combination of genetic and environmental factors.[3] A person is more likely to be affected if they have a family member with the disease.[1] If one twin is affected, a 30% chance exists that the other twin will also have the disease.[6] The onset of disease may be triggered by physical or emotional stress, infection or giving birth.[4] Those with other autoimmune diseases such as type 1 diabetes and rheumatoid arthritis are more likely to be affected.[1] Smoking increases the risk of disease and may worsen eye problems.[1] The disorder results from an antibody, called thyroid-stimulating immunoglobulin (TSI), that has a similar effect to thyroid stimulating hormone (TSH).[1] These TSI antibodies cause the thyroid gland to produce excess thyroid hormones.[1] The diagnosis may be suspected based on symptoms and confirmed with blood tests and radioiodine uptake.[1][4] Typically, blood tests show a raised T3 and T4, low TSH, increased radioiodine uptake in all areas of the thyroid and TSI antibodies.[4]

The three treatment options are radioiodine therapy, medications, and thyroid surgery.[1] Radioiodine therapy involves taking iodine-131 by mouth, which is then concentrated in the thyroid and destroys it over weeks to months.[1] The resulting hypothyroidism is treated with synthetic thyroid hormones.[1] Medications such as beta blockers may control some of the symptoms, and antithyroid medications such as methimazole may temporarily help people while other treatments are having effect.[1] Surgery to remove the thyroid is another option.[1] Eye problems may require additional treatments.[1]

Graves' disease will develop in about 0.5% of males and 3% of females.[5] It occurs about 7.5 times more often in women than in men.[1] Often, it starts between the ages of 40 and 60 but can begin at any age.[6] It is the most common cause of hyperthyroidism in the United States (about 50 to 80% of cases).[1][4] The condition is named after Irish surgeon Robert Graves, who described it in 1835.[6] A number of prior descriptions also exist.[6]

Graves' Disease: Everything You Need To Know 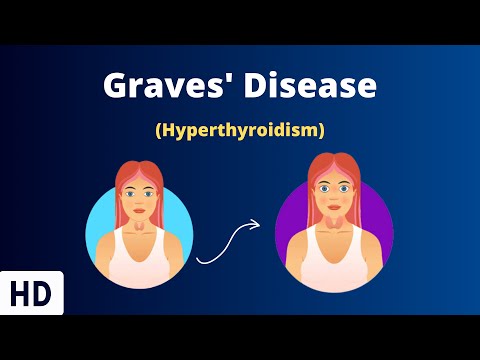