A goitre, or goiter, is a swelling in the neck resulting from an enlarged thyroid gland.[1][2] A goitre can be associated with a thyroid that is not functioning properly.

Worldwide, over 90% of goitre cases are caused by iodine deficiency.[3] The term is from the Latin gutturia, meaning throat. Most goitres are not cancerous (benign), though they may be potentially harmful. A goitre can present as a palpable or visible enlargement of the thyroid gland at the base of the neck. A goitre, if associated with hypothyroidism or hyperthyroidism, may be present with symptoms of the underlying disorder. For hyperthyroidism, the most common symptoms are associated with adrenergic stimulation: tachycardia (increased heart rate), palpitations, nervousness, tremor, increased blood pressure and heat intolerance. Clinical manifestations are often related to hypermetabolism, (increased metabolism), excessive thyroid hormone, an increase in oxygen consumption, metabolic changes in protein metabolism, immunologic stimulation of diffuse goitre, and ocular changes (exophthalmos).[4] Hypothyroid people commonly have poor appetite, cold intolerance, constipation, lethargy and may undergo weight gain. However, these symptoms are often non-specific and make diagnosis difficult.[citation needed]

According to the WHO classification of goitre by palpation, the severity of goitre is currently graded as grade 0, grade 1, grade 2.[5] Worldwide, the most common cause for goitre is iodine deficiency, commonly seen in countries that scarcely use iodized salt. Selenium deficiency is also considered a contributing factor. In countries that use iodized salt, Hashimoto's thyroiditis is the most common cause.[6] Goitre can also result from cyanide poisoning, which is particularly common in tropical countries where people eat the cyanide-rich cassava root as the staple food.[7] 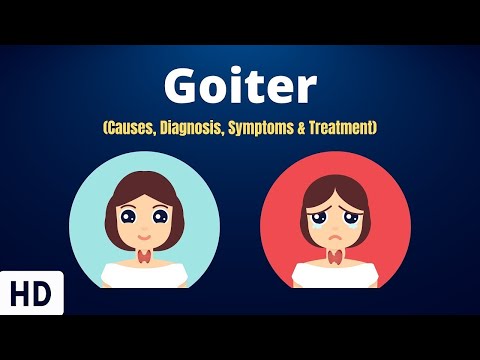