admin
Dissociative disorders
term ‘dissociation refers to the human mind’s capacity to engage in complex mental activity in channels split off from, or independent of, conscious awareness
Dissociative disorders are a group of conditions involving disruptions in a person’s normally integrated functions of consciousness, memory, identity, or perception
The concept of dissociation was first promoted by the French neurologist Pierre Janet
1. Depersonalization &Derealization Disorder
Depersonalization one’s sense of one’s own self and one’s own reality is temporarily lost
Derealization one’s sense of the reality of the outside world is temporarily lost
Usually, such experiences in the mild form at least once in our lives, usually during or after periods of severe stress, sleep deprivation, or sensory deprivation
episodes of depersonalization (and derealization) become persistent and recurrent and interfere with normal functioning, this disorder may be diagnosed
2. Dissociative Amnesia
Retrograde amnesia is the partial or total inability to recall or identify previously acquired information or past experiences; by contrast, anterograde amnesia is the partial or total inability to retain new information
dissociative amnesia (or psychogenic amnesia) is usually limited to a failure to recall previously stored personal information (retrograde amnesia) when that failure cannot be accounted for by ordinary forgetting.
The gaps in memory most often occur following intolerably stressful circumstances— wartime combat conditions, eg, catastrophic events such as serious car accidents, suicide attempts, or violent outbursts
localized - a person remembers nothing that happened during a specific period, most commonly the first few hours or days following some highly traumatic event.
selective amnesia- a person forgets some but not all of what happened during a given period
Generalized amnesia: Failure to recall one's entire life
Systematized amnesia: Failure to remember a category of information, such as all memories relating to one's family or to a particular person
3. Dissociative Fugue
fugue means “flight’’
is a defense by actual flight—a person is not only amnesic for some or all aspects of his or her past but also departs from home surroundings. This is accompanied by confusion about personal identity or even the assumption of a new identity
unaware of memory loss for prior stages of their life, but their memory for what happens during the fugue state itself is intact
Behavior is usually quite normal and unlikely to arouse suspicion that something is wrong.
different lifestyle from the previous one
4. Dissociative Identity Disorder (DID
formerly called multiple personality disorder (MPD), is a dramatic dissociative disorder in which a patient manifests two or more distinct identities that alternate in some way in taking control of behavior.
There is also an inability to recall important personal information that cannot be explained by ordinary forgetting
Each identity may appear to have a different personal history, self-image, and name
host identity - one identity that is most frequently encountered and carries the person’s real name
host is not the original identity, and it may or may not be the best-adjusted identity.
alter identities may differ in striking ways involving gender, age, handedness, handwriting, sexual orientation, prescription for eyeglasses, predominant effect, foreign languages are spoken, and general knowledge
Alter identities take control at different points in time, and the switches typically occur very quickly
DID usually starts in childhood, although most patients are in their teens, 20s, or 30s at the time of diagnosis. Approximately three to nine times more females than males are diagnosed as having the disorder, and females tend to have a larger number of alters than do males

Some believe that this pronounced gender discrepancy is due to the much greater proportion of childhood sexual abuse among females
Criteria for Dissociative Identity Disorder
A. The presence of two or more distinct identities or personality states (each with its own relatively enduring pattern of perceiving, relating to, and thinking about the environment and self).
B. At least two of these identities or personality states recurrently take control of the person’s behavior.
C. Inability to recall important personal information that is too extensive to be explained by ordinary forgetfulness.
D. The disturbance is not due to the direct physiological effects of a substance (e.g., blackouts or chaotic behavior during Alcohol Intoxication) or a general medical condition (e.g., complex partial seizures). Note: In children, the symptoms are not attributable to imaginary playmates or other fantasy play. 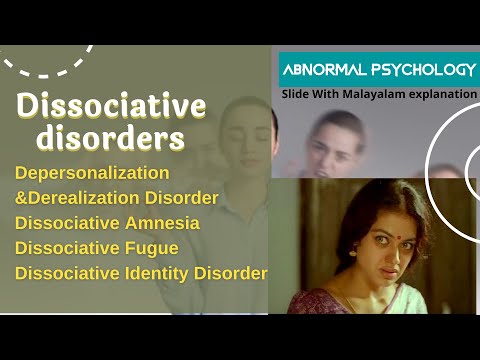 Dissociative disorders term ‘dissociation refers to the human mind’s capacity to engage in complex mental activity in channels split off from, or inde...