admin
X-Men TAS 92's episode from '97 that broke every rule! Descent, the second to the last episode of X-Men: The Animated Series is largely forgotten today, even by many die-hard fans of X-Men TAS 92, and so this groundbreaking cartoon has faded into obscurity, largely lost to history - until today, when we document the amazing things this cartoon did that none had done in history, and really even since then. For starters, Descent was set in post-Victorian London of 1888! And flashes back even farther to 1859 where we meet Charles Darwin! Yes, THAT Charles Darwin, the father of evolutionary theory! Both of these were bold rule-breaking elements - it was almost unheard of to do period pieces in Saturday morning cartoons, especially in action cartoons, unless that was the entire concept of the show (such as the 90s Robin Hood and Prince Valliant cartoons which were set in the distant past).

The theory of evolution is still controversial today, & even more back then.. This was a DANGEROUS topic at the time. Indeed, this was not only the first appearance of Darwin on Saturday morning cartoons, and in fact the first time the historical figure was ever animated in any fashion!

Additionally, this cartoon had NONE of it's stars - there are no X-Men in this X-Men: TAS episode! Yes, Prof. X only in10 seconds - & NO dialogue! The story focuses on a young pre-Mr. Sinister Nathaniel Essex in the 1800s, and his foil, Dr. James Xavier - European ancestor to our guy Prof. X, and of course both are voiced by their normal Sinister/Prof. X actors , Chris Britton and Cedric Smith, both doing great work with accents and varied character ages.

A hit cartoon show without any of its stars, and instead gave 1990s kids an old-timey 1800s story! Is that crazy enough for you? Well, they turned the crazy up to 11, because we're not done yet. The presence of Darwin, his theories, the Bible & blasphemy!

But the cartoon went even further, tying the story into the real-life Jack the Ripper, famous 1800s serial killer! On a Saturday morning cartoon?!? This also was the first animated version of Jack the Ripper, another first for X-Men: the Animated Series! The series even had another first by this ep showing a bit of an actual corpse, a victim of the aforementioned Jack the Ripper!

The cartoon shows Essex's fall into villainy, with Prof. X's ancestor Dr. James Xavier on his heels. Essex mutates himself and adopts the Mr. Sinister persona X-Men TAS fans know so well, and we see Sinister via Jack the Ripper, searching out new body parts. Mr. Sinister origin, it's quasi-Prof. X co-star, definitely one of the darkest cartoons ever.

Unfortunately, this episode faded into obscurity, as part of the maligned final 5 episodes of X-Men the Animated Series. Fox and Saban canceled it; Saban cut the budget.
HeroJournalism, is your source for hero journalism!

All footage of Descent, Nightcrawler, and Secrets Not Long Buried are from VHS recordings of original broadcast premieres, from the HeroJournalism Archives. 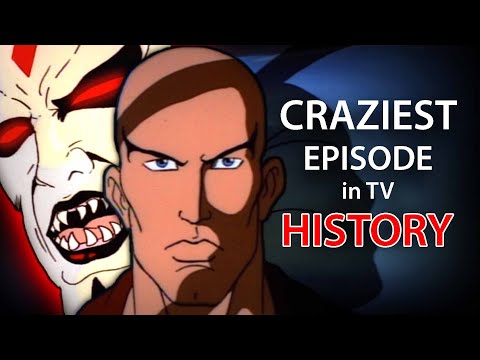 X-Men TAS 92's episode from '97 that broke every rule! Descent, the second to the last episode of X-Men: The Animated Series is largely forgotten toda...