admin
From boutonnière deformity to boxer's fracture, from mallet finger to trigger finger, there are many ways you can injure your fingers and knuckles. A. Rashard Dacus, MD, of UVA's Hand Center, explains the many finger and knuckle conditions and how they can be treated.

Find out more at: https://uvahealth.com/services/hand-surgeons

A boutonnière deformity is caused by a tendon injury. The actual injury is usually a jammed finger, to be honest, and we see that quite commonly, anyone who's played a ball sport. That jammed finger causes a tendon at the middle joint in the finger to get disrupted. If you can catch it early, a lot of times we can treat it in a splint.

The term boxer's fracture is actually a misnomer because most boxers don't actually get this injury, but it's brought about because a large percentage of people with this injury have actually punched something. That impact of the end of typically the small finger at the knuckle is typically what causes the injury.We'll put them in a splint for a short period of time and then a cast for about a month and then the bone heals quite rapidly in most people. And so at that point, it's a removable brace and they can start moving the hand again.

The term mallet finger revolves around the end joint of the finger, which no longer can be held straight. And it typically occurs because the end of the finger hits against something similar to the way a mallet would hit against something. And when that happens, the finger bends forcefully and the tendon disrupts. So they'll get a sag in the finger where they can't straighten it out. A lot of times, we tend to recommend getting an x-ray whenever you have a mallet injury to make sure that it's not a fracture component.

The trigger finger is basically where the finger is able to bend, but it's painful to straighten it out and so it locks down. The term trigger is because you've actually pulled the trigger so to speak, but you can't straighten the finger out. This occurs because of inflammation along the tendons themselves that flex the finger and that inflammation causes the tendon to get stuck. The most common treatment for a trigger finger is actually a steroid injection. And what we've noted is about eight out of 10 people will get better with one injection.

So the big things that set UVA and the Hand Center apart from other places is the streamlined care. The fact that you can come and be seen for whatever problem you have and have all the treatment aspects at your fingertips. 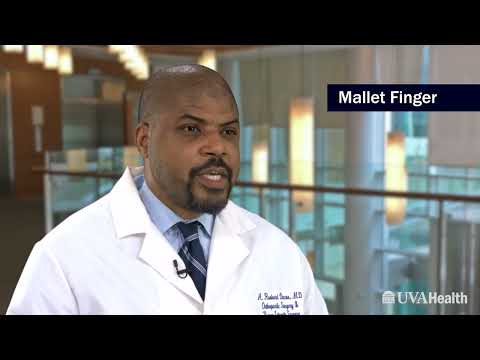 From boutonnière deformity to boxer's fracture, from mallet finger to trigger finger, there are many ways you can injure your fingers and knuckles. A....