admin
Support the channel on Patreon: https://www.patreon.com/jerkcomic
Ko-Fi: https://ko-fi.com/jerkcomic
Pick up shirts and tons of other merch here - https://jerkcomic.creator-spring.com
Or Sign up for Membership right here on YouTube! (Just hit the little "Join" button and choose the tier that's right for you!)

In 1955 one of the most important and influential comic stories of all time was released. Less than a decade later it's creator had disappeared into utter obscurity and left the industry in utter disgust. While his magnum opus, Master Race is often discovered - if it's creator, the renowned "Artist's Artist" Bernard Krigstein - is so amazing, why have we never heard of him? If he's such an amazing story teller, why do we only hear about ONE story? After decades of obscurity, Bernard Krigstein has finally begun to get a modicum of the respect due to him and a LOT of people are finding out there's a lot more to Bernard Krigstein than just Master Race. join me for a 2 part, feature-length dive into Krigstein's career, as well as the REAL reasons that we haven't heard of the man who may in fact be the most important comic artist to ever live for more than SEVENTY YEARS! 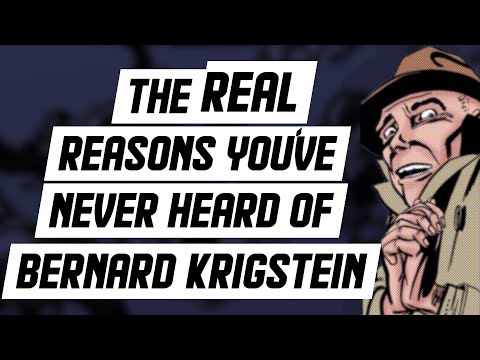 Support the channel on Patreon: https://www.patreon.com/jerkcomic Ko-Fi: https://ko-fi.com/jerkcomic Pick up shirts and tons of other merch here - htt...